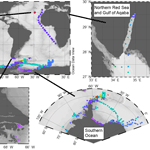 Abstract. This data collection originates from the efforts of Sigrid Schnack-Schiel (1946–2016), a zooplankton ecologist with great expertise in life cycle strategies of Antarctic calanoid copepods, who also investigated zooplankton communities in tropical and subtropical marine environments. Here, we present 33 data sets with abundances of planktonic copepods from 20 expeditions to the Southern Ocean (Weddell Sea, Scotia Sea, Amundsen Sea, Bellingshausen Sea, Antarctic Peninsula), one expedition to the Magellan region, one latitudinal transect in the eastern Atlantic Ocean, one expedition to the Great Meteor Bank, and one expedition to the northern Red Sea and Gulf of Aqaba as part of her scientific legacy. A total of 349 stations from 1980 to 2005 were archived. During most expeditions depth-stratified samples were taken with a Hydrobios multinet with five or nine nets, thus allowing inter-comparability between the different expeditions. A Nansen or a Bongo net was deployed only during four cruises. Maximum sampling depth varied greatly among stations due to different bottom depths. However, during 11 cruises to the Southern Ocean the maximum sampling depth was restricted to 1000 m, even at locations with greater bottom depths. In the eastern Atlantic Ocean (PS63) sampling depth was restricted to the upper 300 m. All data are now freely available at PANGAEA via the persistent identifier https://doi.org/10.1594/PANGAEA.884619.

Abundance and distribution data for 284 calanoid copepod species and 28 taxa of other copepod orders are provided. For selected species the abundance distribution at all stations was explored, revealing for example that species within a genus may have contrasting distribution patterns (Ctenocalanus, Stephos). In combination with the corresponding metadata (sampling data and time, latitude, longitude, bottom depth, sampling depth interval) the analysis of the data sets may add to a better understanding how the environment (currents, temperature, depths, season) interacts with copepod abundance, distribution and diversity. For each calanoid copepod species, females, males and copepodites were counted separately, providing a unique resource for biodiversity and modelling studies. For selected species the five copepodite stages were also counted separately, thus also allowing the data to be used to study life cycle strategies of abundant or key species.